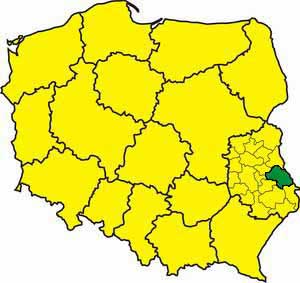 The Chełm county is located in the Eastern part of the Lublin province. It consists of 15 districts, including 1 urban and 14 rural districts. It occupies an area of 1885.84 km 2, with a population reaching 79.8 thousand people. The average population density is 43 persons per km 2. One of the greatest strengths of the Chełm district is a direct vicinity and a very good board crossing as well as rail connections in Dorohusk. The location of the county and infrastructure constitute favourable conditions for doing business and establishing contacts with economic partners of Ukraine and other Eastern countries. The openness to cooperate with foreign countries is the major perspective in developing the Chełm district. The district maintains a close relationship with the Kowel region, as evidenced by the Bug cooperation agreement signed in the framework of the Euro region. A transit route of international importance runs through the area of the county linking Warsaw and Kiev through Lublin, Chełm, Łuck, Równe, Żytomierz. This route, along with the road crossing in Dorohusk, was included in the category of clearways as well as the European roads’ network. The local government conducts many road investments which result in a good connection between separate districts.

The Chełm district has an agricultural character. Cultivated soils occupy 92 809 hectares. Their quality varies widely. Poor soils predominate in the North part, whereas more fertile soils in the South and West. Farms are located mainly in the hands of individual farmers, and the dominant group constitutes those to 10 hectares. The largest share in the crop production have cereals, potatoes and sugar beetroots. The livestock production involves mainly cattle and pigs. Business opportunities in agriculture beyond the crop production and livestock are in areas such as the development of organic farming and food processing. The activities of production and services are concentrated around the town of Chelm and Rejowiec Fabryczny.